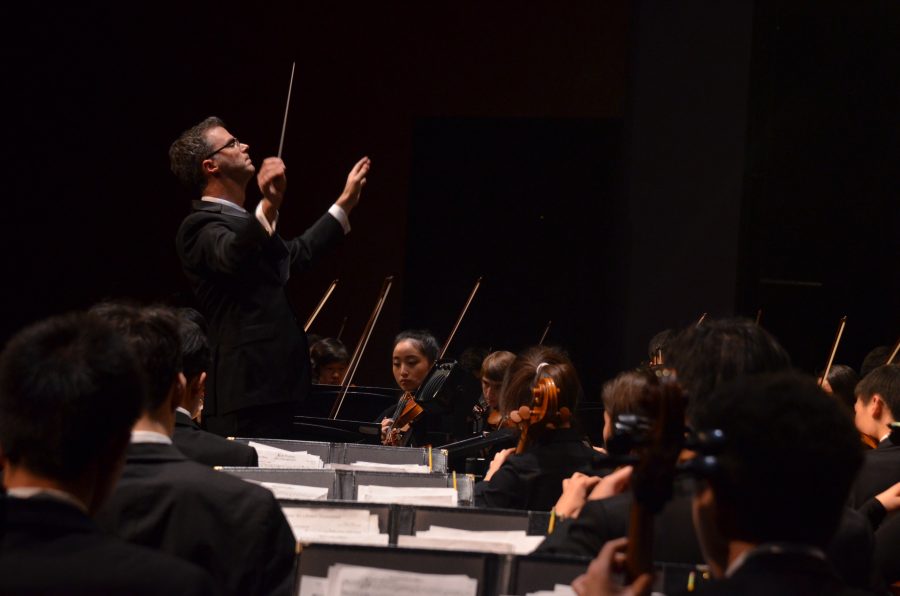 Orchestra conductor Chris Florio conducts the orchestra during the annual Winter Concert. The orchestra is currently in New York for their performance at Carnegie Hall.

Christopher Florio, the upper school orchestra director and instrumental music teacher, had been preparing for this trip for two years, while the orchestra group began their preparation at the beginning of this semester.

“Pressurized is probably the most suitable word for us, because we have to practice more for these more challenging pieces. I have say these pieces are much harder than the first semester pieces, for every instrument,” clarinetist Emma Li (9) said.

Besides performing at Carnegie Hall, the orchestra also toured around New York City, visiting the Statue of Liberty and viewing the broadway show “Anastasia.” Additionally, seniors told stories about their best memories in orchestra at their banquet at the Redeye Grill.

“We will be doing some clinics with some guests conductors, including a composer who has composed a piece that we’re premiering. We’re also doing a group banquet dinner. We’ve rented out a room in a restaurant down the street from the hotel. . .” Florio said. “Then, we’re going on a dinner cruise with all the other groups that are performing. The last day is all Carnegie Hall.”

Co-concertmaster May Gao (12) reflected on her thoughts following their concert. She credited the entire orchestra for their hard work, including Mr. Florio and the orchestra alumni.

“I feel mostly relief after a concert, because you have so much tension built up over a performance. Once you’re done, you realize you’ve done an amazing job or that it’s the best you could’ve done. It’s just a very relieving feeling,” May said. “I feel like after performances, everyone just feels really proud, especially because it is not only just the work we’ve put in, but also the work Mr. Florio has put in the program in the last 12 years. It’s not only a performance of us, but a performance for the musicians who came before us.”

This version of this piece originally published in the pages of The Winged Post on March 28, 2017, incorrectly stated that graduating seniors were unable to attend the trip to Carnegie Hall. This correction has been made and the Harker Journalism staff regrets this mistake.