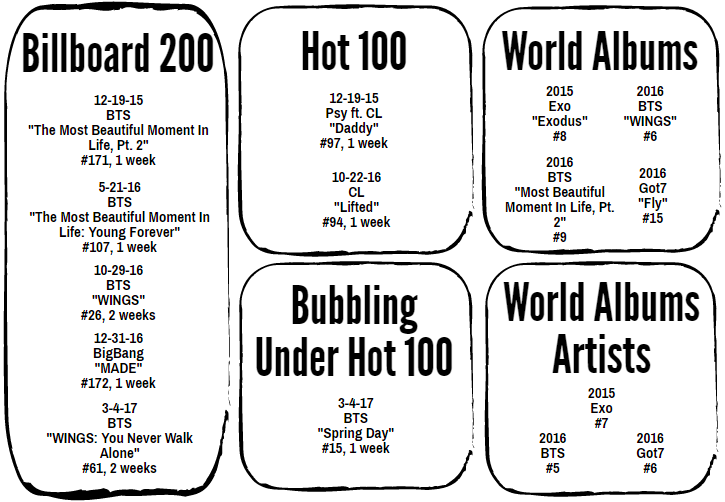 by Helen Yang and Sofie Kassaras

K-pop is known for having much higher production cost than American music, and many international fans enjoy music videos and albums despite the language barrier.

“It’s really nice to just hear the actual melody of what’s happening instead of the lyrics sometimes,” Big Bang and BTS fan Christie Chen said (10). “Give it a chance—A lot of people don’t because they don’t know Korean, but it’s really worth it, and after a while with subtitles it doesn’t make a big difference anymore, and it’s really fun. It’s a really big fandom, a very big family kind of feel.”

Another reason for K-pop’s growing popularity—known as the “hallyu wave”—is the unique fashion style.

“K-pop groups have separate concepts and great visuals. In addition to the music, Korea really emphasizes on visuals and how good the people look, like their fashion sense,” Got7 and I.O.I fan Kevin Tzeng (11) said. “It’s a good idea for K-pop to expand into the U.S. Hallyu wave, man!”

Recently, in the world of K-pop, many popular artists have released new content, as well as concert tour dates to various cities in America.

After nearly two weeks of teasers, on March 13, the seven member boy group Got7 released “Flight Log: Arrival,” their sixth mini album and the third installment of their “Flight Log” series, as well as a music video for the title track “Never Ever.” The album topped the iTunes charts in Hong Kong, Indonesia, Malaysia, the Philippines, Thailand and Vietnam. It also reached reached the top five in six other countries, including fifth in the United States. Got7 also broke their own records for album sales and music video views. more than 220,000 copies of “Flight Log: Arrival” were sold in pre-orders alone and 30,000 copies were sold within two hours of release, while their previous album released in September, “Flight Log: Turbulence,” sold 230,000 copies in total and 20,000 copies within 24 hours of its release. The “Never Ever” music video garnered a million views in five hours, four hours less than the music video for “Hard Carry,” which was released alongside “Flight Log: Turbulence.”

KCon, an annual K-pop convention held around the world, took place in Mexico City on March 17 and 18, which marks the first time for KCon to visit Latin America. Many artists, including BTS, Eric Nam, EXID, NCT 127, Astro, Infinite H, Monsta X, and Red Velvet performed over the course of the two days.

New ten member girl group Pristin, sister group of popular boy group Seventeen, officially debuted on March 21 with their first mini album along with their music video for the title track “Wee Woo.” The album, titled “HI! PRISTIN,” features six songs, which include lyrics and melodies composed by the members of Pristin.

Also on March 21, Monsta X released their first full album, “the Clan Part 2.5: The Final Chapter <Beautiful>,” which is the last part of their “The Clan” series. The album features ten tracks, and the music video for title track “Beautiful” connects with the storyline from their previous music videos.

Five member boy group SHINee held concerts in America for the first time since their debut in 2008 on their tour, “World Concert V,” and performed their hit songs as well newer songs from “1 of 1,” their fifth full studio album released in October. They were in Dallas on March 23 and Los Angeles on March 26.

Seven member boy group BTS, “Artist of the Year” in the 2016 Mnet Asian Music Awards and one of the top record-holders for K-pop in Billboard charts and music video views, is holding “The WINGS Tour: BTS Live Trilogy Volume III,” a world tour in ten countries across Asia, North America, South America, and Australia. With two additional tour dates added to the group’s visit to the U.S. due to overwhelming demand, BTS is now performing five concerts in three different U.S. cities: in Newark on March 23 and 24, in Chicago on March 29, and in Anaheim on April 1 and 2. BTS sold out more than 95,000 tickets in the U.S. within minutes of opening, the most for any K-pop tour in the U.S. to date. The concerts include performances of their most popular past songs and newer ones from “Wings,” BTS’s second full studio album released in October and the best-selling K-pop album of 2016, as well as “You Never Walk Alone,” which dropped in February and features four new tracks as an extension “Wings.”

“I am going to [a concert]; it’s the BTS one in LA,” Gina Partridge (9) said. “Originally we were going to go to Disneyland, but then we were like ‘Oh Shoot! BTS also has a concert during that time!’ and we got tickets.”

This piece was originally published in the pages of The Winged Post on March 28, 2017.