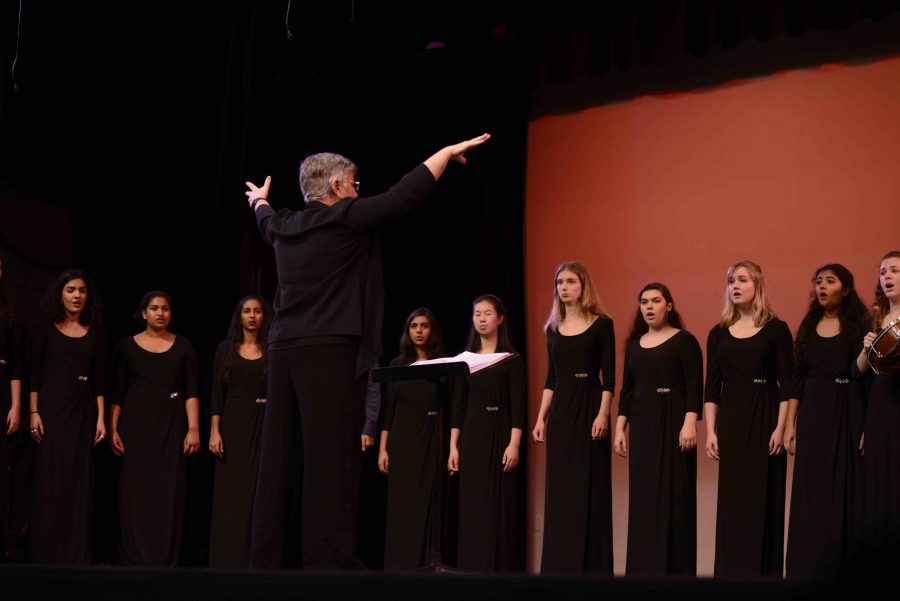 Conservatory groups from the Upper, Middle, and Lower schools performed in the annual holiday show for students and faculty to enjoy on Friday, Dec. 9.

Conservatory groups from the Upper, Middle, and Lower schools performed in the annual holiday show for students and faculty to enjoy on Friday, Dec. 9.

“I loved the holiday show,” viewer Alex Chen (10) said. “Especially with the dance performances, you can tell that they put in a huge amount of time and effort into creating intricate and elaborate routines, and I was quite impressed with a number of them.”

For the performers, the holiday show was a chance to display their talent and a way to celebrate holiday spirit.

“[Cantilena] started preparing for the show after Thanksgiving break, so we had two weeks to practice. But I think that what was cool about this song is it’s unusual,” Cantilena singer Millie Lin (11) said. “You might’ve heard the theme from Frozen before, and it’s very low and very tribal, so I think that we prepared for that and approached that in a very creative way.”

“Speaking for myself, I’d rather see a live performance, but it wasn’t that we thought that this was an improvement. This was about the only game in town,” said Daniel Hudkins, Director of Information Technology Service and Support.

Despite a new way of viewing the show and no shortage of streaming quality difficulties, students and faculty enjoyed the show.

“There were a few moments where the screen glitched or went back to the way it was in the beginning, but it wasn’t a big problem. The show was great, and I definitely enjoyed all of the performances a lot,” viewer Anay Karwal (9) said.

Upcoming conservatory events include the Middle and Upper School Winter Instrumental Concert and the Upper School Dance Production in January.