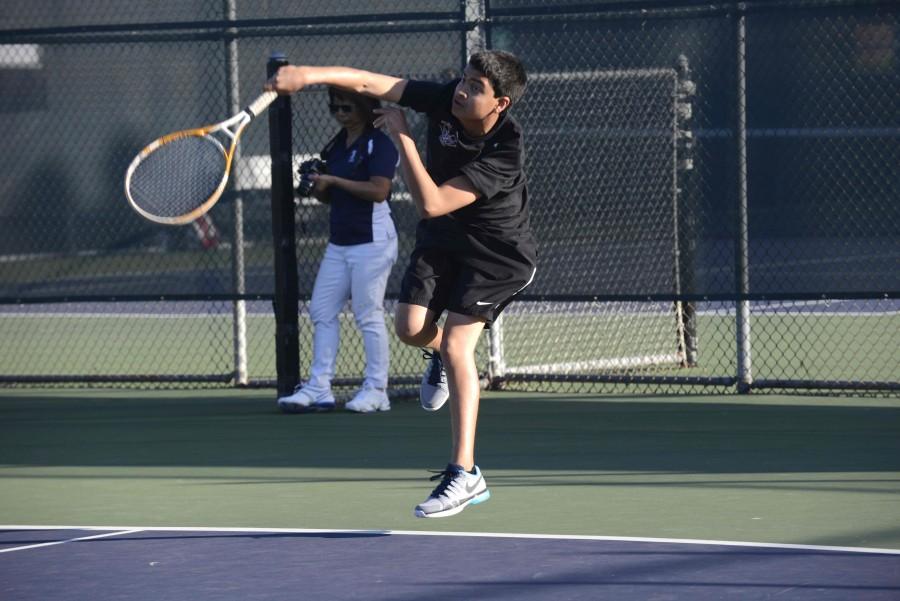 Anjay Saklecha (9) serves during their match against King's Academy. The boys won 6-1.

Boys tennis beat King’s Academy today 4 p.m. at Santa Clara Tennis Center in a 6-1 victory for their first match of the season.

“It was a good start, but we have a long way to go. It sets a tone, but it’s a match that we’ve won since I started coaching, so it’s not a statement win,” Fruttero said. “[It] certainly gets us off on the right positive mindset and motivated to keep improving.”

“Going into this, this is the first time I played doubles with Kai in a serious setting and I wasn’t sure how we would do,” Swapnil said. “The other team at first seemed pretty good, but then it turns out when we actually played they were inconsistent so I think that’s what killed them.”

Singles players Edward Tischler (11), Gary Tsai (10) and David Wen (10) all won their matches, with only team captain Ronak Baldua (12) losing his match. Doubles team Randy Zhao (10) and Anjay Saklecha (9) along with the team of Aman Singh (10) and Neil Bai (10) also won their matches against their respective King’s Academy opponents.

Randy gives his thoughts on how he thought he performed today.

“Often times in the game I’ll just get upset and I’ll just try to do too much with the ball, so I have to just remain calm,” he said. “I think my serve was definitely on point today, and a lot of my returns were doing a lot better than I expected because I have been working on them.”

The team now prepares to go to a Fresno tournament this weekend.