Planting seeds of kindness in the Harker community 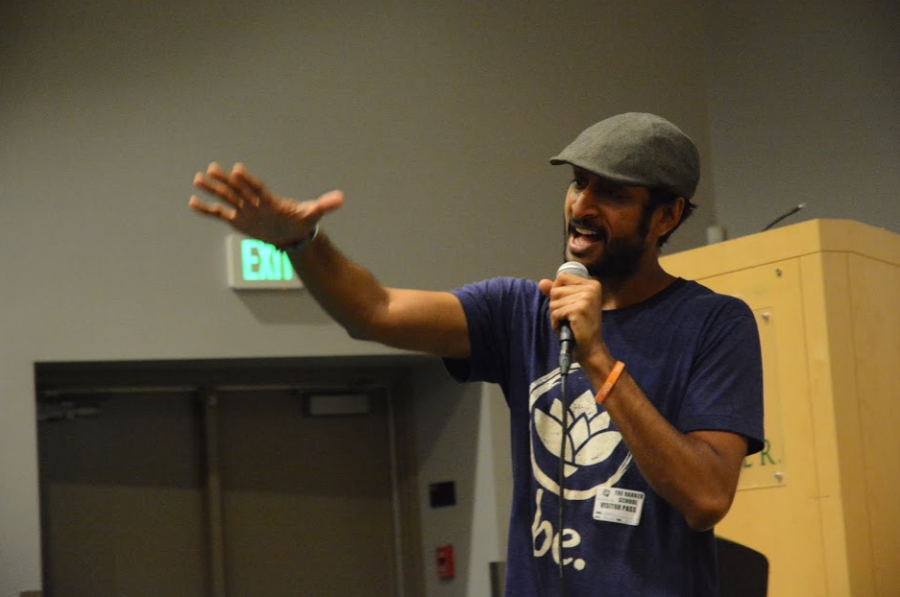 “Ultimately, what we take will always disappear, but what we give will live on for years.”

These words are from “Graduation,” a song by Nimo Patel, who visited Harker on October 8th to discuss his path to happiness with the Harker community. “Graduation” is one of the ten songs on Patel’s album Empty Hands, which he released in May after working with children in Gandhi Ashram, a slum in India, for several years.

At a young age, Patel was interested in music. He would often rap for fun in class and eventually started writing full songs. While he was getting a business degree from the Wharton School of Business at University of Pennsylvania, Patel started a band, Karmacy, with some friends. The group went on to have a hit single, “Blood Brothers,” which gained popularity in South Asia.

Despite Patel’s monetary success, he felt that something was missing in his life. “Moment to moment in my life,” he said. “I was not feeling happy, peaceful, or joyful.”

He attended a show by EKTA, a group of children that were raised in Gandhi Ashram, about unity. Patel realized that these children were more spiritually rich than anyone with material wealth.

“My best experience has been spending time with children from communities that are very under resourced and how they always smile.” he said. “Every time I see them it’s so powerful for me because it’s a reminder that we have the capacity to be joyful and happy no matter what circumstances.”

He became disillusioned with the mainstream music industry over the next few years. Seeking greater purpose in his life, he started meditating and moved to Gandhi Ashram. Patel described his methods for planning out his future.

“I have no plans, I try to live life like a flashlight. In the dark, if you have a flashlight, you can’t see a mile ahead of you right.” he said. “You can see fifteen feet in front of you, and as you take one step, the light also takes one step.”

At Harker, Patel discussed how he has found personal fulfillment through simplifying his life, service, pure intentions, and gratitude, as well as the inspiration behind his album, “Empty Hands.”

“The realization from inside that in this one life that we have to live, how can I live with as much purpose and make use of this short time that I have to add as many positive seeds on this planet before I leave?” he said. “ That’s kind of one of the themes of “Empty Hands.” We come onto this planet empty handed, and we leave empty handed.”

Patel also shared his realizations about the nature of humanity. “We can plant seeds, but we can’t control them,” he said. Patel explained that as much as we may want to change people, the best we can do is act as role models. “Let’s grow as human beings,” he said. “Together as a family.”

Patel finished his time at Harker with an anecdote about eggs. If someone cracks an egg from the outside, it’s food, but if someone let’s the egg open by itself, it’s a beautiful chick. “We are all like the eggs in a sense,” he said.

Nimo’s life influenced the Harker community before his visit. Math teacher Bradley Stoll, who organized Nimo’s visit, has been a fan of Nimo’s since he first heard his music.

“To listen to the Empty Hands album is to be inspired by Nimo,” Stoll said.

Stoll was first introduced to Empty Hands by a friend, and it quickly became his favorite album. Stoll, who enjoys doing random acts of kindness for strangers, plays Empty Hands in class to his students because he appreciates the positive message in each song.

“Reading about [Patel’s] life has shown me how people can change, and it gives me hope,” he said. “He had monetary wealth and left that all behind in search of a much more important inner richness.”