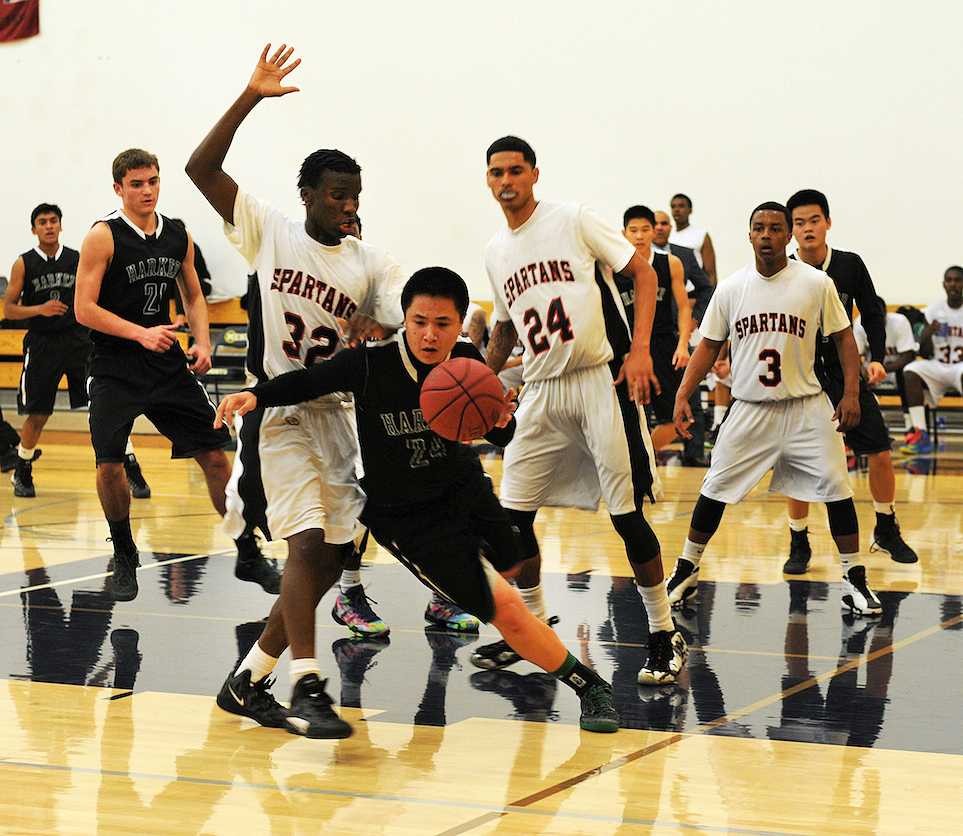 Nicholas Nguyen (11) dribbles to the basket in the Harker vs. Seaside Spartans game where the Varsity Boys' Basketball team won 71-61.

Varsity Boys’ Basketball emerged with a 71-61 victory over second-seeded Seaside Spartans at the Coast Central Section (CCS) semifinals today, becoming the first boys’ sport ever to advance to the CCS finals.

The Eagles maintained a steady lead throughout all four quarters in the game, finally defeating the Spartans by ten points in the last quarter.

Senior Wei Buchsteiner led the team with 21 points, followed by Srivinay Irrinki (11) and Nicholas Nguyen (11) with 17 and 14 points, respectively.

“Honestly, it feels amazing. There is so much chemistry with this team, and our bonds are only getting stronger,” captain John Hughes (12) said. “Everyone contributed tonight, from playing to bench support, but regardless, it was purely awesome. It’s about to get crazy!”

Eric Holt (11), Huck Vaughan (12), and Justin Yen (11) were among the prominent players in the game and helped bring the team to a dominating win.

Teammate Arjun Ashok (11) shared his post-game enthusiasm and reflected on the team’s achievement in the game.

A sizable crowd attended the game, rallying the team to the decisive victory.

“The most exciting part of the game was the atmosphere with all the students cheering on the team to a sweet victory,” Krish Sanghi (12) said.

The boys will play Sacred Heart Preparatory in the CCS finals this Saturday, March 8. If the Eagles remain undefeated, the team will then advance to the division IV CIF State Basketball Northern California championships against St. Patrick-St. Vincent on Wednesday, March 12.