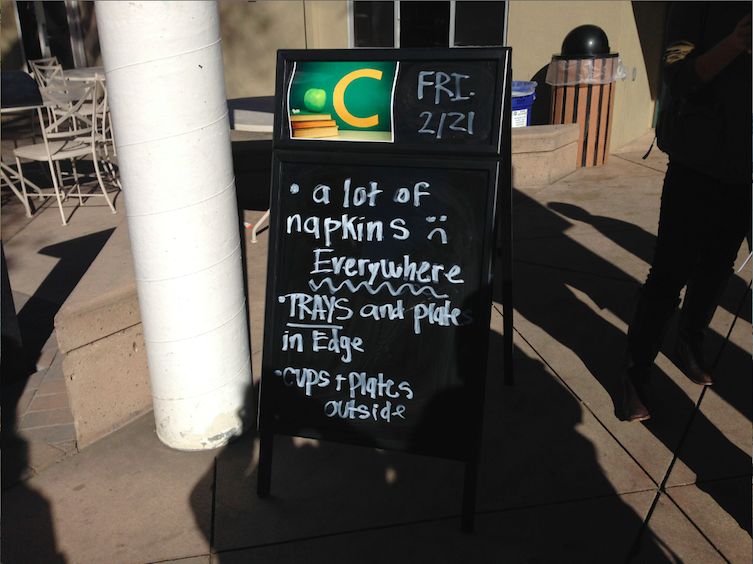 The Upper School received a C for its clean-up after lunch today due to the large amounts of napkins left out. The prize for earning six A's in a two week time span has not been determined yet.

Upper School students received a C today from the kitchen staff as a reflection of the leftover trash, a new grading system implemented a month ago.

Last year, ASB tried raising awareness on the problem of leaving food and trays after lunch but failed to make an impact. After talking with Chef Steve and understanding that the problem was worsening, they felt that they needed to create a new system and policy this year.

“We felt like we needed to start something like positive reinforcement and punishment sort of system and that’s what the grading system tries to do,” ASB Treasurer Rohith Bhethanabotla (12) said. “There needs to be some sort of community goal, something people can look forward to but something people don’t want to happen either.”

In a two week span, students must receive six A’s to get the reward for the next two weeks. On the other hand, six C’s or lower will result in a punishment, such as taking away the Mexican Grill as an option for lunch.

Some students notice a change in others’ actions after implementing the grading system.

“I feel like we should be able to fix it easily because we are smart kids,” Emma Doherty (10) said. “I don’t think they are thinking about the grade the most, but mostly the goal of keeping the Mexican food.”

Shikhar Dixit (11), who was featured in the trash video presented at a school meeting, recognizes the importance of the grading system to keep the eating area clean.

Kitchen staff is hoping this method will make a difference in the cleanliness of the eating locations, as the grades have been fluctuating and have not yet been consistent.

“I’ve noticed that a lot of kids will clean-up after themselves. It’s only a few kids that I’ve noticed that leave their stuff,” Bistro staff Connie Valenzuela said. “It’s kind of like one bad apple spoils the bunch.”

The following grades were given for this week, Feb. 18 to 21: