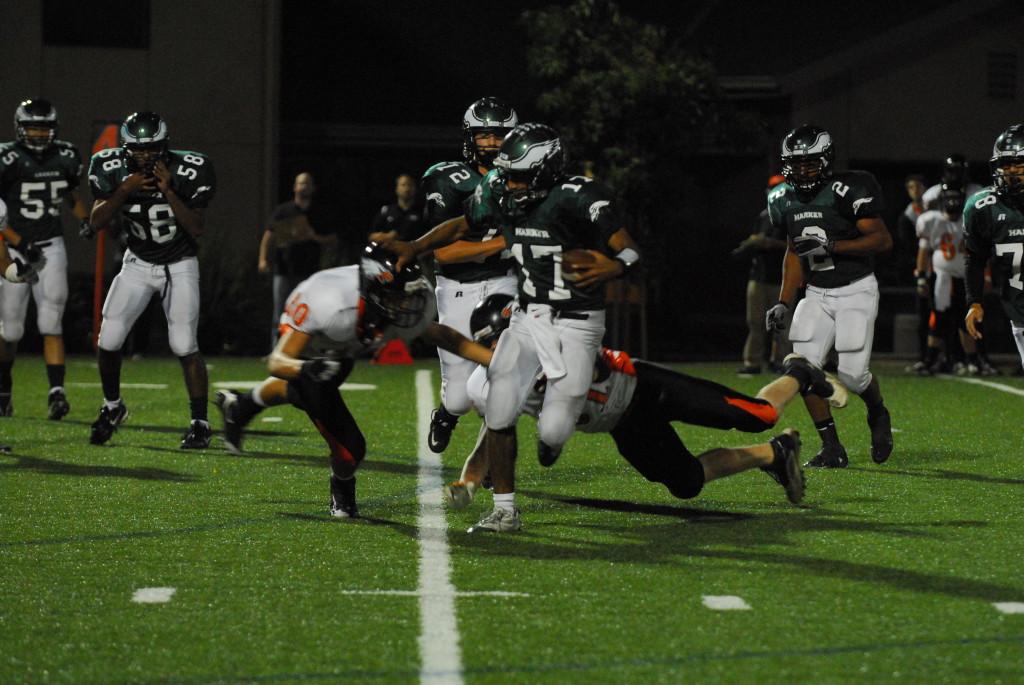 by Mercedes Chien and Laura Yau

On Friday, October 1, Varsity football made team history when they defeated the California School of the Deaf (CSD) 23-0 at Davis Field, remaining undefeated
at 5-0.

“It’s amazing,” said wide receiver Bradley Araki (11). “I’m so proud of the team for going somewhere no other Harker [football] team has gone.”

In total, the team made three touchdowns, two two-point conversions, and one PAT throughout the game. Chris McCallaCreary (12) made the first touchdown during the second quarter, leading to a two-point conversion by Greg Cox (12) immediately after a botched PAT attempt. Keeping the team’s high intensity, Alex Kablanian (12) intercepted a pass in the third quarter and successfully ran for the second touchdown. Captain Gautam Krishnamurthi (12) finished the game by intercepting another pass and making the final touchdown in the fourth quarter.

The team has defeated San Jose High, Marina, Soledad, and neighbor Lynbrook so far, and through their winning performances, senior captains Rishi Bhatia, Jerry Shteynberg, Greg Cox, and Gautam Krishnamurthi have been standouts for the team.

The team will compete against Capuchino High School on Davis Field on Friday, October 8.

“Winning all of our games shows that we are capable of so much,” Rishi Bhatia said. “[It’s] been exciting winning all five of our games, but we need to focus on our next game to reach our full potential.”
Surpassing last year’s record is not enough for the team.

“The most important thing is to go 6-0,” Alex Kablanian said. “I mean, we’re in the history books now, but we want to be in there forever.”